The input LED circuit modeling is still the same but the cell resistance is now modeled from the diode current (its LOG transform actually) instead of diode voltage … both LED current and output resistance functions are now interpolated more accurately by using third order polynomials on both sides of the model … seen here being “poly-fitted” in Freemat v4 : 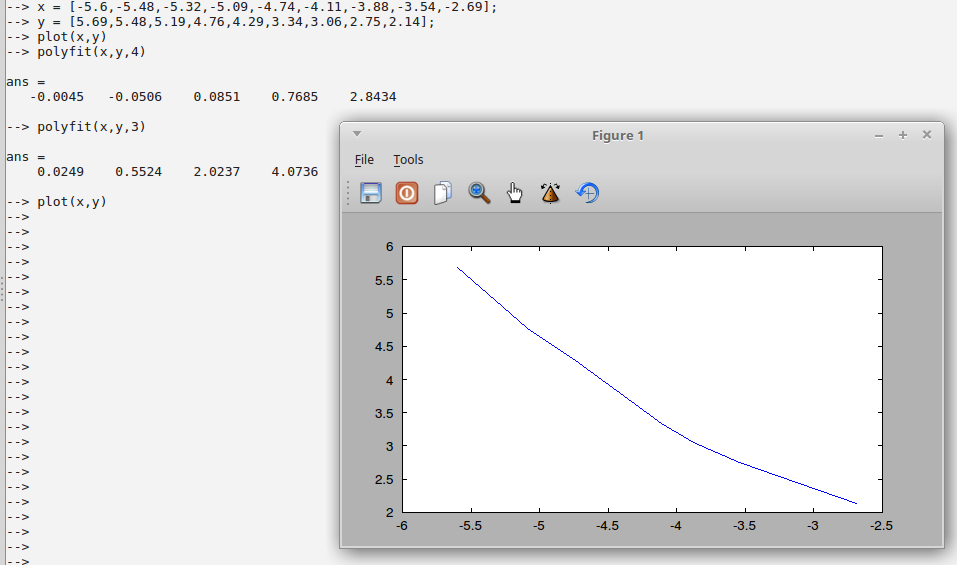 Notice the use of 3rd Order Polynomial functions on both sides of the model. Interestingly, (yes I had to check) going to 4th Order modeling (potentially achieving higher local accuracy) already started to create overshoot in the output values and was therefore of no benefit. So, the conclusion is automatic …

3rd order modelling, both on the input and output ports, is the most appropriate for my set of chosen data points – yielding the highest levels of local accuracy possible against proper overall full-range behavior …

we can confirm the output values match well against our starting data, checking with basic AC and DC analysis at first … for example, from linearized small-signal/AC model values :

The new NSL32-SR3 SPICE model works well in all major forms of circuit simulations: AC-analysis (linearized circuit equivalents), DC-analysis and – ultimately – Transient Analysis, shown in action below (inside TINA-TI v9.0) setting the speed of an Univibe LFO circuit where the output cell equations are operating in a non-linear large-signal simulation environment!

Directly with a voltage source, first at Vd = 1.57v

(near bottom edge of vibeLFO speed range – not that of model) :

(near upper edge of vibeLFO speed range – not that of model) :

and “commensurately” for values in between …

the opto-coupler SPICE model can then also be driven directly by a current source as well, shown here with a single current driving the series connected opto-coupler LED’s

(near bottom edge of vibeLFO speed range – not that of model) :

(near upper edge of vibeLFO speed range – not that of model) :

and “commensurately” for values in between …

the full “high accuracy” modeling range is still fairly modest by professional standards (my data set: 2.5uA to 2.05mA taken from one test unit), and so this model should still not be taken as a full solution … of course, it suites my purposes in many applications and in research:

To be clear once more: there is no timing modeling included here // THIS IS A STATIC MODEL only and cannot be relied upon for accurately simulating circuit behavior when either side is subject to rapidly varying (ie., dynamic) activity !