A culmination of the work I started in 1994, with a first official publication of my 12ax7 modeling and simulation plots in 1998.

The transfer response corresponding to the usual Cathode resistor value of 1.5k ohms is taken from my tube amp book “Inside Fender and Marshall Tube Amps” and highlighted below: 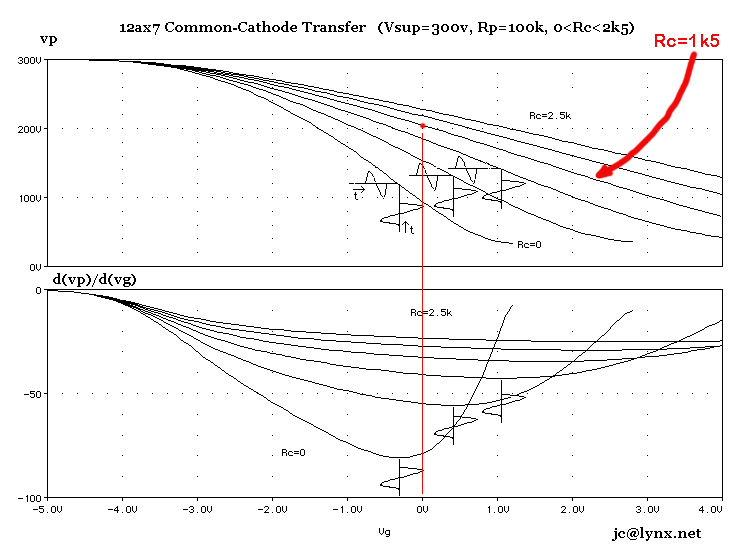 This Common-Cathode Triode gain stage transfer curve is the benchmark I chose for defining tube-like behavior. To be clear, we are talking about large-signal response in the DC-transfer sense, ie extracted adiabatically and applying only to DC-coupled circuits.

The goal is to come up with circuitry that will produce the desired electronic transfer function, so far I have found two ways of doing it. In my opinion any suitable solution needs to meet two conditions: (i) the circuit has to be 100% DC-coupled internally (ie., no caps or inductors used to achieve wave-bending), and (ii) the circuit form needs to have an implementation that is practical in the designing of a greater (amplifier) circuit. It can’t just be a novelty circuit.

Ten years ago almost I came up with the following solution, one using an n-channel jFET device:

From this idea, I built a couple of stand-alone “non-linear boosters” shortly afterwards and had some great success // but then put the idea aside to pursue other research … since then, I’ve learned quite a few things about vintage class-A EQ circuits (thanks to conversations with Roly Roper yrs ago), and recently found a suitable combination of gain/EQ/non-linearity circuit blocks to make this all work properly and logically

so here it is … my sonic high performer:

featuring 6 physical inductors with a cut-boost BASS control, cut-boost sweep-able MIDS, and the usual TREBLE cut, GAIN and MASTER … controls that have an uncanny range to them, and in particular with the ability to adjust the degree of wave-bending independently of output (the Master circuit is linear) 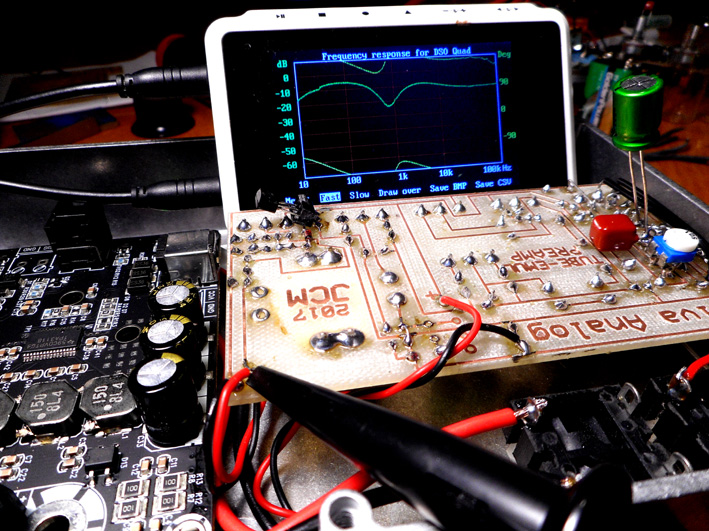 to meet my design criteria any amplifier design at the very least should be able to produce a classic mid-scoop (Fender guitar amp) Frequency Response – as shown above here … but this design does more, in fact mid-scoop or boost – and continuously variable from 700hz to about 6khz …

this following simulation plot shows the range of adjust-ability for the semi-parametric MID filter section: 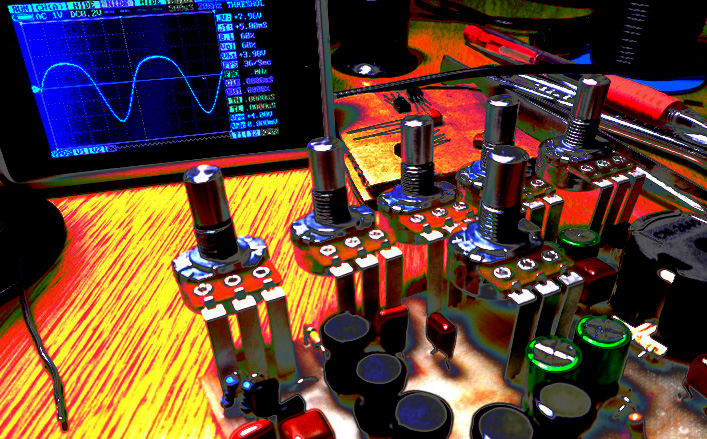 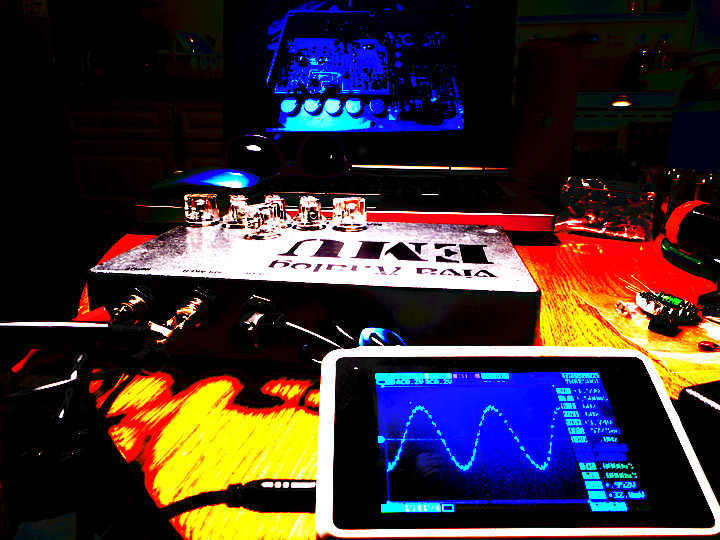 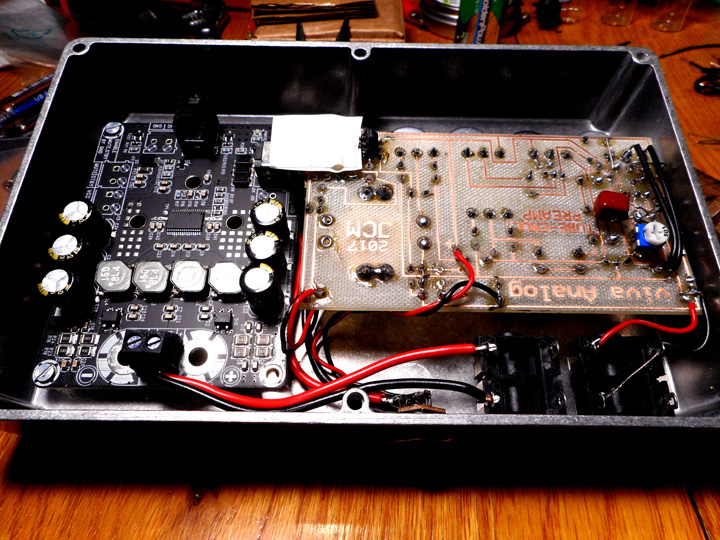 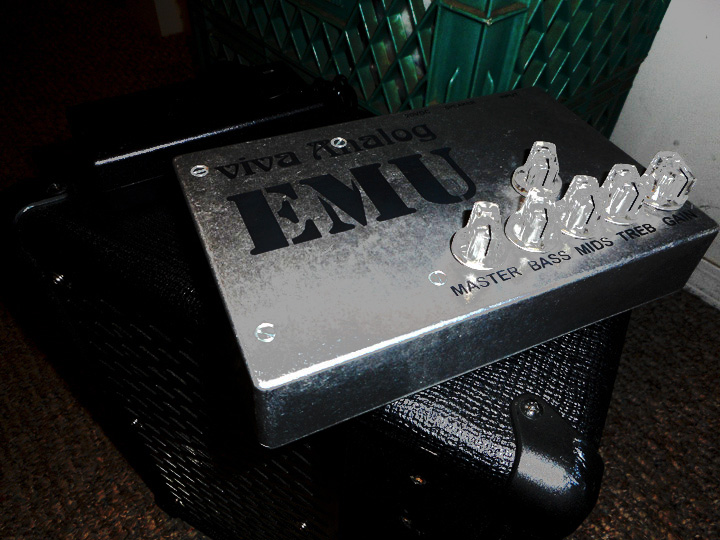 dumbfounded, buddy looked at it … said it sounded like a Marshall

… he meant an old Marshall

Been powering the ATAK-60 with two 12v Lead-Acid batteries lately, with a total running voltage of about 25vdc at idle. I wanted  to see if the manufacturer recommended 65w 20volt Laptop adapter was to blame for the crapping out at very high signal levels. Still the same. This means (strong guessing at this point) that the class-D module doesn’t like seeing large non-linear signals at its input – simply put … I’m not putting down class-D technology or this here 60w power module – just stating my findings in this experiment.

In the mean time I picked up a busted Alesis Nanoverb for $5 at a pawn shop. After fixing two cold solder joints at the jacks and spraying all the controls with Deoxit D5 the unit was good as new.

Going from a Strat to the Nanoverb into the ATAK-60 is giving me a sorta Walter Becker’ish clean tone with good hair when pushing … It’s very organic and balsy ! … studio-like, maybe 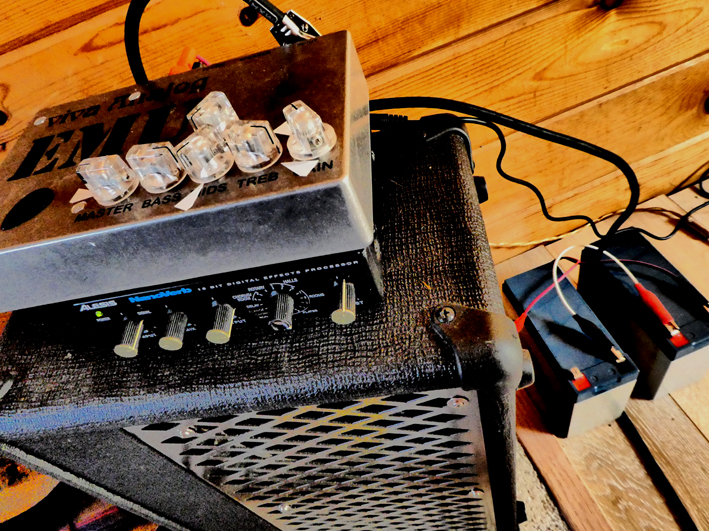 The next step is to build a stand-alone NL-preamp and go into a quasi-complimentary class-AB amplifier (eg., my modded Acoustic 361 clone) to confirm my suspicions about the class-D module I’m using here … should be interesting to compare.

still, this little “practice/battery” rig sounds more than OK – providing a dynamic charge that I’m not experiencing in the other “emulator” amps I’ve tried.