PCB amp, component side flipped upside down in the chassis = impossible to work on “visually” while plugged in … almost all resistors are 1/4w – pretty chancy stuff … with ridiculously narrow traces in some areas on the PCB … and that’s just for starters // the rat’s nest around the PT is quite a sight … perfectly accurate schematics for this beast are not available, let alone a layout diagram (C11 as drawn in the one I have is not present in the chassis) 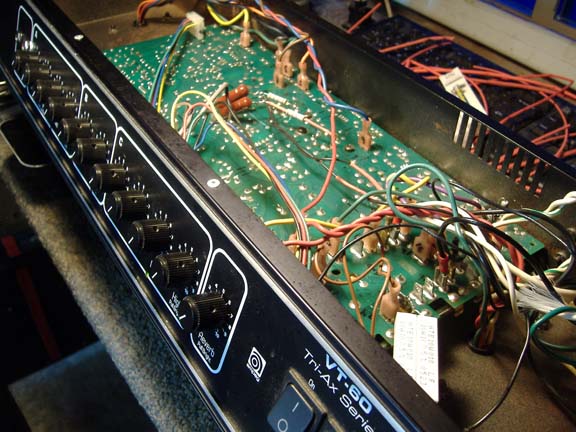 for starters, the input pin (5) on one power tube socket was lying at +325v instead of -v bias voltage … the pcb short was eliminated by wiring in grid bias resistors, signal caps from PI circuit, and grid blockers “flying” over the pcb board in pt-pt fashion

At first the main B+ voltage was lying at +515vdc, filaments at 6.7vac and Bias feed tap was too low to provide appropriate voltage to bias tubes below 60mA (each) … way too high for 6L6’s / not to mention providing very short filament life

obviously, the primary winding on PT had shorted windings – so voltages had to be brought down to sane levels by introducing a power resistor in series with Prim winding … B+ thus brought down to 483vdc, filaments to 6.1vac, new bias circuit introduced wider range voltage source // set to -49v (with room to spare), power tubes were biased at 27mA/30mA …

then, a leaky signal cap in the preamp section was replaced to removed DC which made vol/tone controls inoperative … channels C & B then worked ok / high gain channel A was still dead – and would require much more work to suss out … luv that switching system, a total circus !