Full-Wave (FW) rectifiers have many uses in electronics. Although they are typically seen in Linear Power Supply circuits they can also be used for processing signals, as seen in such circuits as Frequency Doublers and Envelope Detectors.

Like many analogue circuit blocks, FW Rectifier circuits come with their own set of behavioral parameters. On this page we will take a brief look at some of the salient features of a few such circuits belonging more to the signal processing variety, and hopefully see how these change with the various architectural forms.

Rectifiers play an essential role in the more common form ubiquitously used in power supply circuits. To work, these so-called “linear” FW Rectifier power circuits require two AC voltage sources feeding a common summing node through each diode; both AC voltages being out-of-phase relative to each other (typically derived from a center-tapped transformer).

For example, here’s the power supply section of a 50’s made Fender 5E3 Deluxe amplifier that relies on a thermionic rectifier tube to convert AC power to DC: 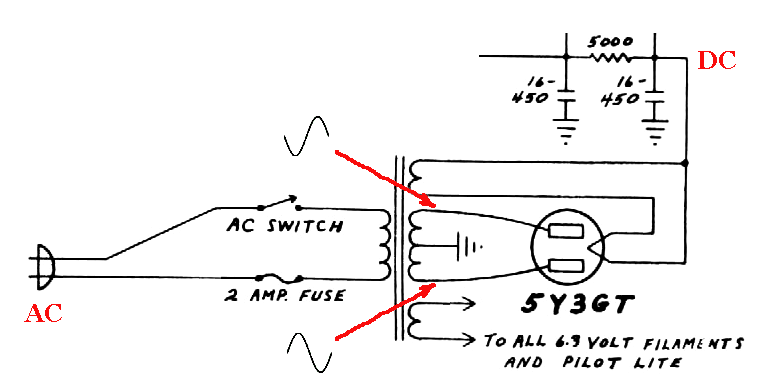 In these two examples above, Capacitance is attached to the output of the FW rectifier section in order to form a source of, albeit dirty, DC power.

In what follows, I will focus on the more general class of FW Rectifier circuits, namely those used in signal-processing. And to be specific, I will only describe circuit behavior in absence of any kind of added capacitance.

The following circuits are formed by taking the well-studied differential pair circuit and tying the two output “tails” together, in effect summing the output currents into a single one.

However, the principle behind the Single-Ended (SE) rectifiers go beyond the current sharing principle of the differential pair. In this case the circuit allows each device to operate alternatively in class-A mode for half a phase – and the whole works requires a resistor for biasing, whereas in a differential pair an active current source can typically be used.

What we are interested in finding out here is what happens when one device takes over from the other in between phases. This kind of interaction is a little too complex to put into simple verbal analogies. This is where high-accuracy computer simulation comes into play, displaying the subtle interactions occurring between the constituent parts of the circuit.

One group of simulations we’ll be performing here is known as DC Transfer analysis; which takes the circuit through a very slow sweep of the input variables to produce an output. In this case, any reactive element present in the circuit would play no role in setting output.

The other known as TRANsient Analysis, simulates real-time signals as they would be applied to the circuit in a test setting.

The results in one group of simulations should correlate somehow with results seen in the other, and vice-versa. This is the whole point of this short study.

The earlier versions were implemented using Vacuum Tube Triodes; ones that were spec matched preferably. With simulation models we can use circuit simulator software and plot out the DC Transfer curve derived for such circuits. The first example uses my 12ax7 simulation models (re., Glass Audio 2/98) to show what kind of transfer profile is associated with this active transconductance elements. 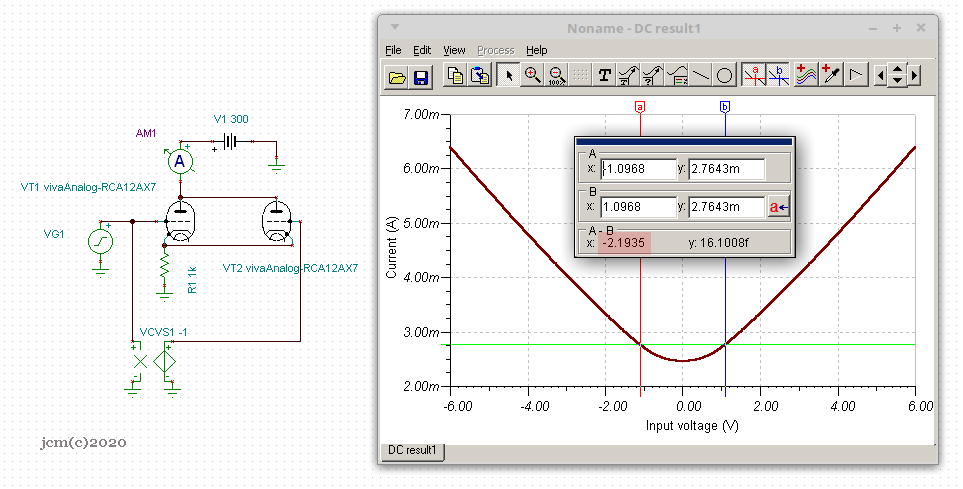 In this case, we can very roughly ascribe a dead-band width of about 2Vpp …

With the advent of the Bi-Polar Junction transistor a slightly more linear version of the circuit became reality. The Shin-Ei “Octave Box” and “Super Fuzz” are know for using this circuit (along with an extra capacitor). A simulation involving an model shows a roughly 50mVpp wide dead-band …

We notice a considerable difference in dead-band width. For the J201 I estimate it to be about 240mV wide, compared to the 2n5457 that I estimate in this graph at about 560mV wide. Despite the questionable accuracy of values, we can say that the j201 has a dead-band roughly half as wide as that of the 2n5457 devices … which is commensurate with the ratio of corresponding Vgs(off) values (more analysis needed here …) 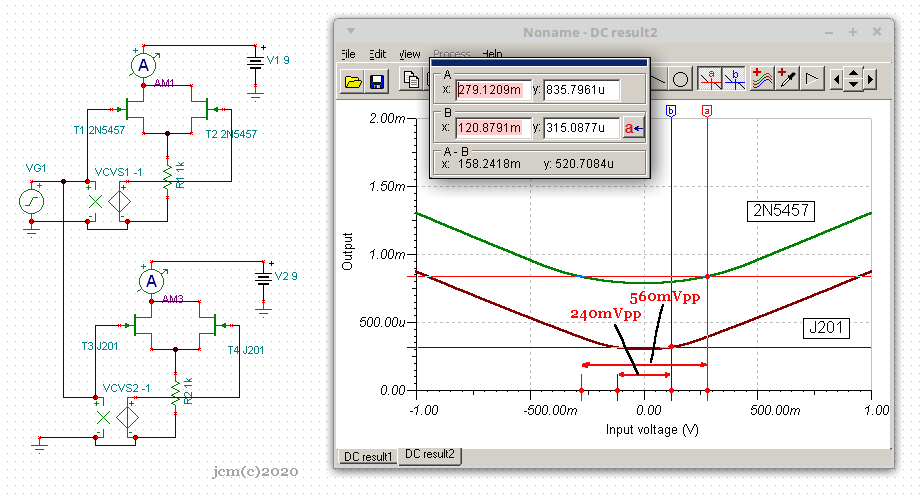 When using op-amps to produce FW-rectifiers there are two groups of options; ones that fall in the “ideal” category, and those that don’t. What follows is an example of an ideal rectifier circuit based around two op-amps and a couple of rectifier diodes … 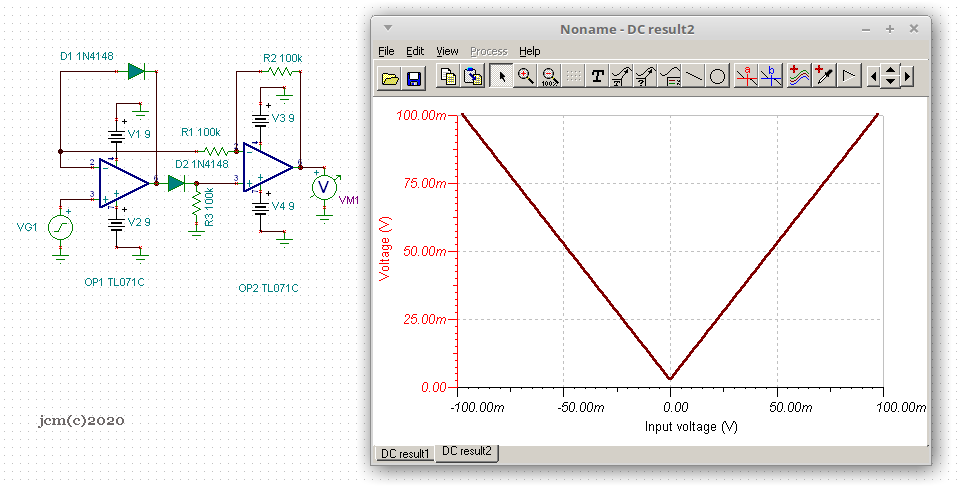 The term “ideal” refers to the near-zero width dead-band, which translates into a zero threshold FW rectifier function.

Alternately we can use op-amps in a non-ideal manner in case there’s a reason to introduce a controllable amount of dead-band width. This is similar in function and structure to the the rectifier circuits found in Linear Power Supply (PSU) circuits mentioned at the very beginning. But in subsequent Signal Processing applications (ie., in Envelope Detectors, for example) this can be used to generate a non-zero Threshold limit …

Here, we estimate a dead-band about 820mVpp wide when using single Si (1n4148) diodes in each feed …

This brief roundup of FW Rectifier circuit DC Transfer simulations demonstrates a few alternative forms of the basic FW Rectifier function, along with their particularities.

A WORD ABOUT THE THE DEAD-BAND

Other than “side-band” linearity, the main thing to notice here is that each version of the SE circuit has its own particular form of “dead-band” – ie., the area surrounding the 0 volt mark – that is, in the middle area of the transfer range. Depending on circuit conditions, this aspect of the DC Transfer response can play an important role in setting the final output waveform shape once the time comes to process AC signals.

When the two outputs of a differential pair circuit are tied together we get a FW Rectifier transfer function. When applying anti-phase AC signals at the input we get the characteristic Full-Wave “double lobe” output waveform.

In order to get a characteristic FW output there needs to be a sufficient amount of differential signal applied to the inputs of the circuit, an amount varying with each type of transconductance device used to make up the circuit.

*In the following simulations both devices are perfectly matched*

12 Volts peak-to-peak are necessary to produce a strong Full-Wave output waveform here; the most insensitive of all the circuits presented on this page 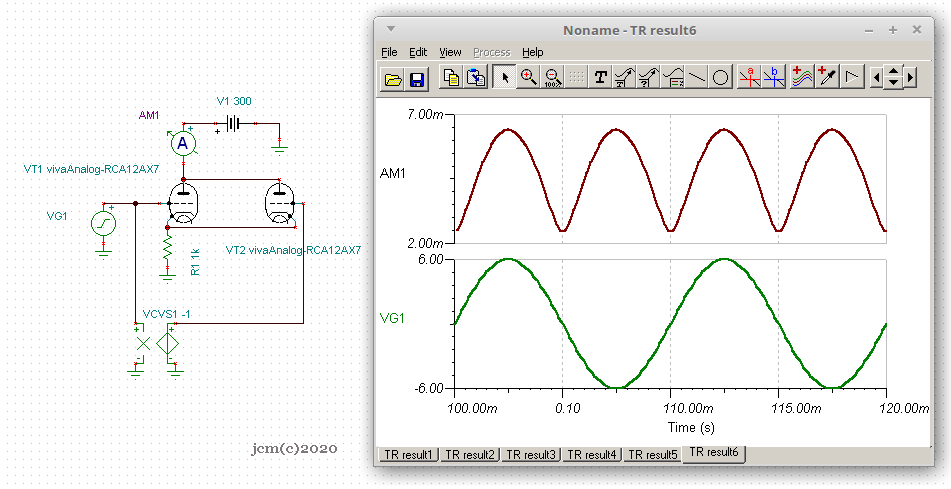 Next at the bottom of the sensitivity list, a Vgs(off) mean-value of 1.372 volts it takes about 4 Volts peak-to-peak to produce a strong Full-Wave output waveform … since the dead-band width varies with Vgs(off) this parameter may need to be observed carefully in some designs 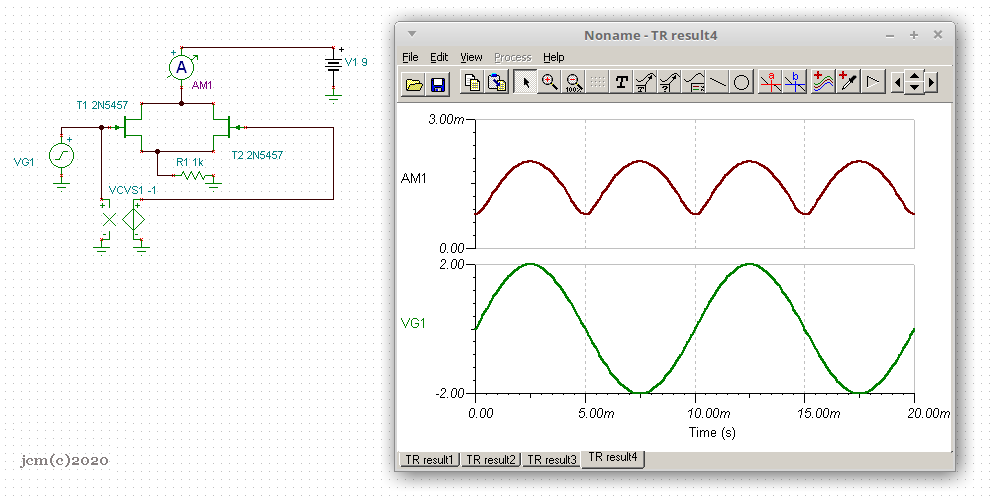 We can see why these circuits are referred to as IDEAL … the circuit is capable of producing perfect FW output characteristics with the smallest of input signal levels; here shown with an already large 200mV peak-to-peak input … 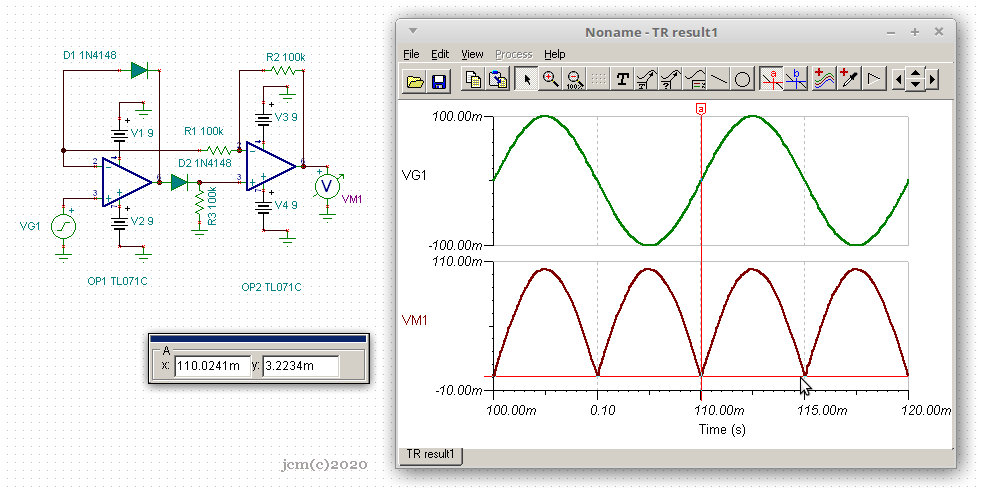 This brief roundup of FW Rectifier circuit DC Transfer simulations shows what kind of alternative forms of the function are available.

DC-Transfer analysis alone cannot give us a full picture of a circuit’s behavior once AC signals are applied. As shown above, TRANSIENT analysis can tell us how the circuit reacts to AC signal, but generally it does so only at one fixed amplitude at a time. If we repeat enough of such simulations while sweeping through signal levels we can gain a “rough” idea of the true signal-gain profile with a bypass capacitor introduced.

Here, we can easily see how the region of linear transfer starts at around 40mVpp of signal amplitude, before which the transfer drops gradually to nil. This is in line with the DC-Transfer results we obtained above for this circuit.

In the 2n5457 jFET case we can see the region of linearity starting at around 800mVpp, which is in line with the rough 560mVpp estimated from the DC=Trasfer curve above.

Both results jive well with their respective DC-Transfer response curves. Showing, among other things, how vastly different the dead-bands created by each type of devices used can become. Of course, the linearity threshold varies proportionately with the value of Vgs(off).

All simulations were carried out in TINA-TI, a freeware program supplied by Texas Instruments