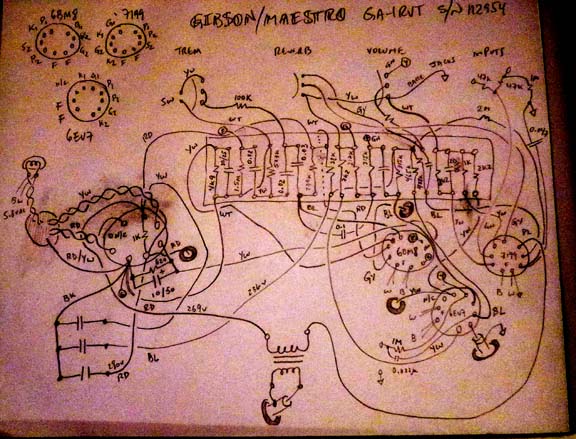 I dig a good challenge // reverb and tremolo were DOA, more surprises waiting within … here’s a quick rundown of what I found …

(i) the PSU and overall wiring … everything looked and measured pretty ok considering age and corroded state of the chassis // that is, except for a filament voltage that laid at 5.8vac instead of the customary 6.3vac (right on the edge of no-go) … (ii) turns out the reverb pan guts were destroyed // three of the four ferrite beads that drive the coupling transformers inside the can were totally stretched out and beyond repair (weird) … I wired in a fresh pair of wires with RCA plug ends and tried a few pans I have handy here and none were giving a strong enough response … I then tried hooking up a Zoom G1 effects box and got great verb/delays and an interesting signal boost option … the owner could try his luck at finding a suitable reverb pan that will couple (quite unlikely considering the low-gain natuere of the drive and recovery circuits) … the external effector approach is very cool IMO and opens up a host of potential applications that goes well beyond what the basic design could do // keeping the original signal path and Tremolo circuit intact … to make this work I loaded down the reverb transformer output with a resistor to keep the signal from getting too massive there (the Zoom G1 has a high Zin so we can’t rely on that to keep the signal tame) … with a properly chosen load value this would not interfere with a reverb pan if we decided to use one, that option remains open // best of both worlds … (iii) the Trem, turns out there was a cold solder in the circuit, and in addition the shorting switch on the back of the Speed pot was no longer working // doubly dead … what I decided to do was to use the Reverb kill pedal and wire it to the Trem pot switch terminals … we now have a perfectly functioning and foot defeat-able tremolo … and with the reverb, now potentially an external unit, can be foot defeated as well // this made most sense … (iV) other things … I found the 620ohm Cathode bias resistor on the power tube to measure around 880ohms … I inserted a 5watt 600ohm resistor that actually measures 612ohms cold // Cathode bias voltage went form 30vdc to 18.5vdc, schematic shows 20vdc … the gain of the amp has gone up as a result, reaching max (stock) power … I did not tweak or alter any other part of the signal path // it could be modded for more gain, but I didn’t touch it … also, to try to remove some hum form the circuit I lifted the grounded side of the filament circuit and applied two 100 ohm resistors to balance the filament circuit w.r.t. ground … didn’t notice a huge change, but I left it balanced/modded

I tested the amp using the speaker in my Champ; that is, a Celestion Super8 // indeed, I was getting great sounds using the Zoom G1 in the reverb’s Send/Return circuit … killer actually 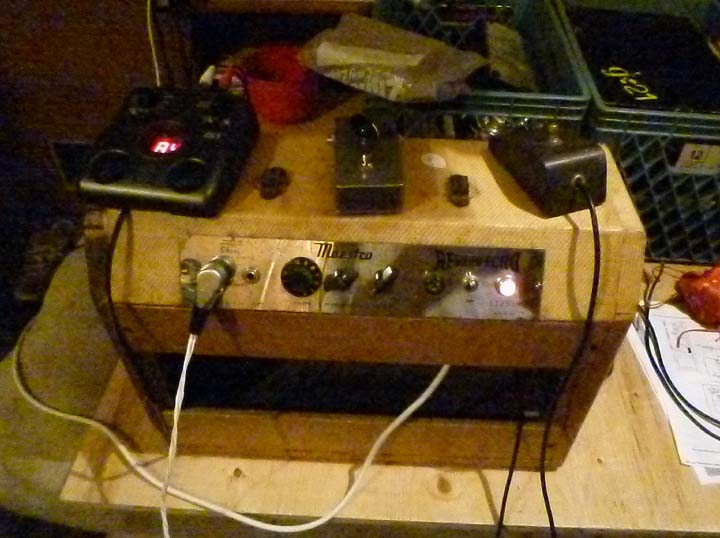 after a first round of mods I was still annoyed about the amount of hum, even with the volume controls set to zero, the amplifier had // of course, this is very common with single-ended (SE) amps … after taking a closer look at the grounding scheme I noticed that the whole amp was grounded to the chassis via the input jacks … the only other time I’ve seen this was in an 90’s re-issue AC30, which was also noisy (in that case beyond repair) …

all I did in this case was re-route the two main current absorbers in the PSU circuit by giving them their own seperate attachment points in the chassis // as far as possible from the input jacks at the same time … this, in tandem with the balancing of the filament circuit, gave the amp a virtually hum-free performance … as it lies now, this is definitely an impeccable “recording ready” guitar/harp tube amplifier, with a natural tone that compresses naturally … amazing little amp // apparently Gibson shipped 232 of these in total between 1962 and 1963 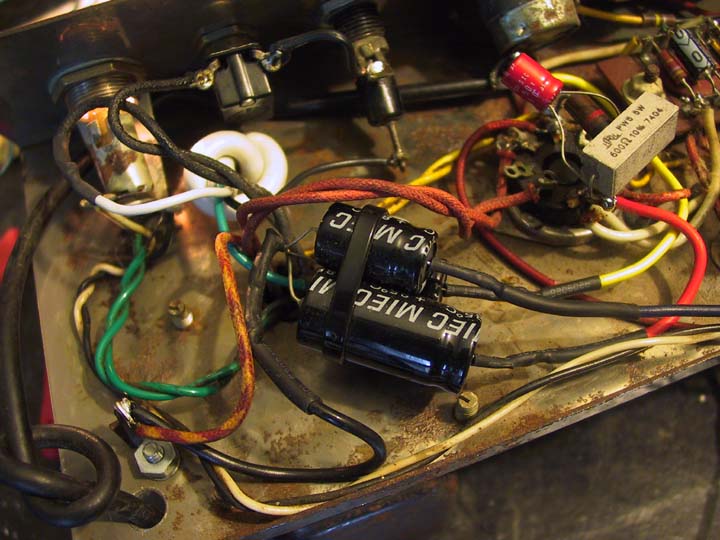 For a full resolution scan of my art-work and more design details on this fine tube amplifier please consider joining my work forum and perusing through the Thermionics section: