jcm Posted on December 11, 2015 Posted in Tech No Comments

If you’ll notice, there aren’t too many DIY audio folks doing general circuit design using jFET transistors outside of maybe playing with Mu-stages and preamp style clipping circuits. Although it can almost be overlooked in some structures, the Common-Source jFET gain stage and other single-ended structures like it require knowledge of Vp (aka Vgs(off) or Vp) when optimizing for gain and headroom.

Of course, if we’re building a straight “one-to-one” tube-preamp emulating overdriver circuit, where clipping distortion is the name of the game, this likely won’t matter as much (or does it …?!!).

But if we want reasonable amounts of gain and headroom out of a Common-Source gain stage, or the most of it as possible, then we might want to know the value of this limiting constant. Most people don’t realize that a jFET Common-Source stage cannot handle signals above |Vp| volts in amplitude (actually, that’s one way to estimate Vp), which is in stark contrast to the analogously structured BJT or Vacuum Tube Triode circuits – one thing that makes jFET’s unique. All this then may serve to explain why the Common-Source jFET circuit is not as widely used in audio as its BJT Common-Emitter counterpart. Depending on the situation, proper use of a jFET transistor might well require sufficient characterization before hand; but many don’t know how to do this correctly …

Another important case where this applies can be found when jFET’s are used as voltage-controlled-resistors (VCR’s) as seen used in many Phase Shifters circuits and AGC/compressors. (Dallas Arbiter “Trem Face” anyone ?!)

In some circuits there lies a great benefit in using properly and accurately matched devices. In fact, there is a strong potential for extended Phasor range when the matching is done to a higher level of accuracy (ie., at +/- 5mV resolution). More on this later …

It is important to know that unlike their BJT counterparts, say, jFET’s differ in specs according to a random 2-dimensional variance (see accompanying plot below) // in particular, any method that collapses that relationship into a single number will obviously be wrong by nature. An example of the later approach (blindly borrowed from BJT testing methods, and used by many to this day) will be analyzed and presented on this blog shortly …

To obtain accurate characteristic pair values a multi-tester approach is used, one where the Drain-to-Source voltage is held constant during all measurement phases; a voltage chosen to lie well into the pinch-off region for that device (ie., well above the maximum listed value for |Vp|). For my lots of 2n5457 devices I chose a test voltage of 7.50 volts, as |Vp|max = 6 volts.

Three pairs of data points are extracted per device, one for Idss (at Vgs=0), one near cut-off (at Id=10uA) and a mid-point value (somewhere between Idss/3 and Idss/2) … from this 3-point data a good estimate for Vgs(off) can be derived … leaving us with a numerical characterization pair (Idss@7.50v and Vp) for each device … if all devices are tested at the same reference voltage then these two numbers can be used to establish a strong basis for matching. Assuming matched characteristics throughout the hole transfer range of two devices for which Vgs(off) and Idss@7.50 values coincide closely. 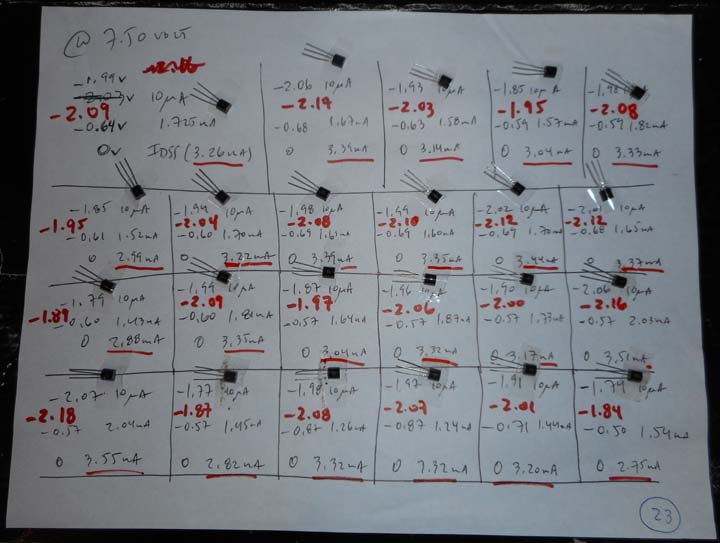 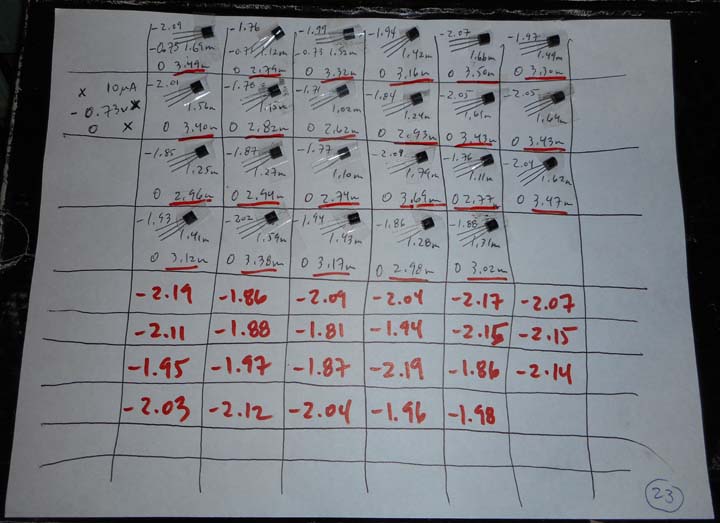 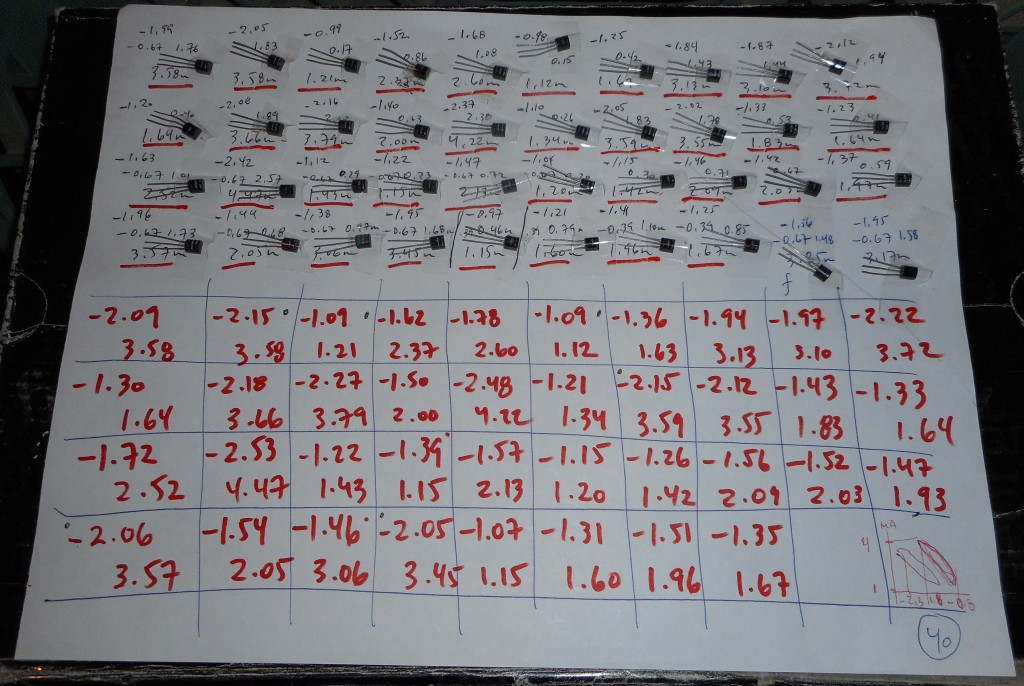 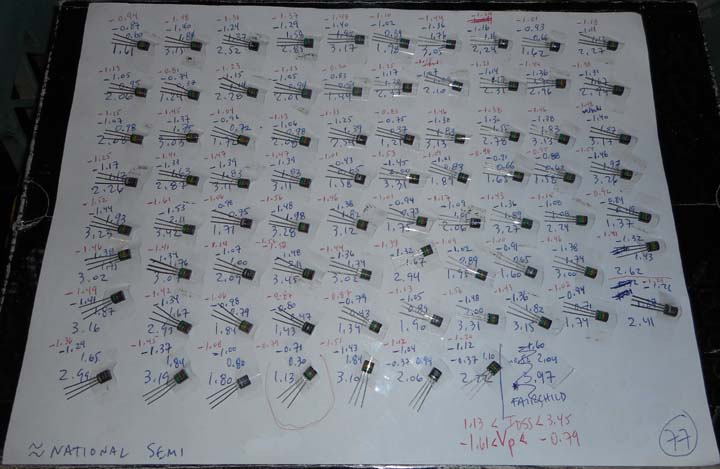 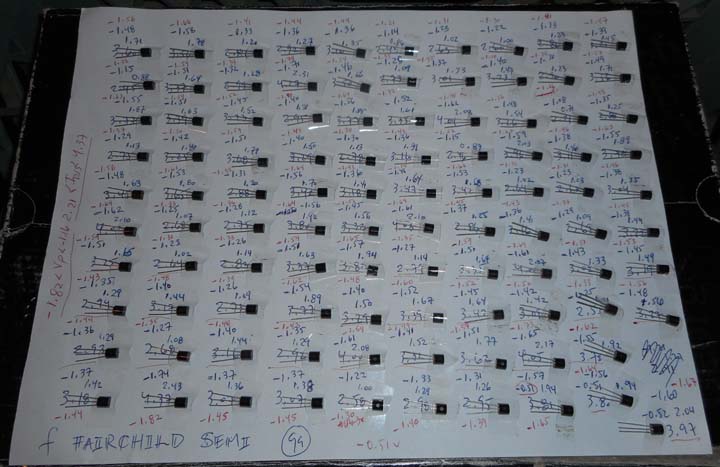 IN case you’re wondering, Temperature does not factor in jFET testing as much as it does with BJT’s. I’m not sure, but I think this is because the forward-biased diode junction in a BJT is strongly dependent on temperature, firstly, whereas in a jFET this junction is reversed biased and so temperature plays a secondary role in the device’s behavior … indeed, touching the jFET with fingers during testing does not cause a strong migration of readings like it does with BJT’s, and so the testing can be done reliably without requiring a temperature controlled forced-air system. 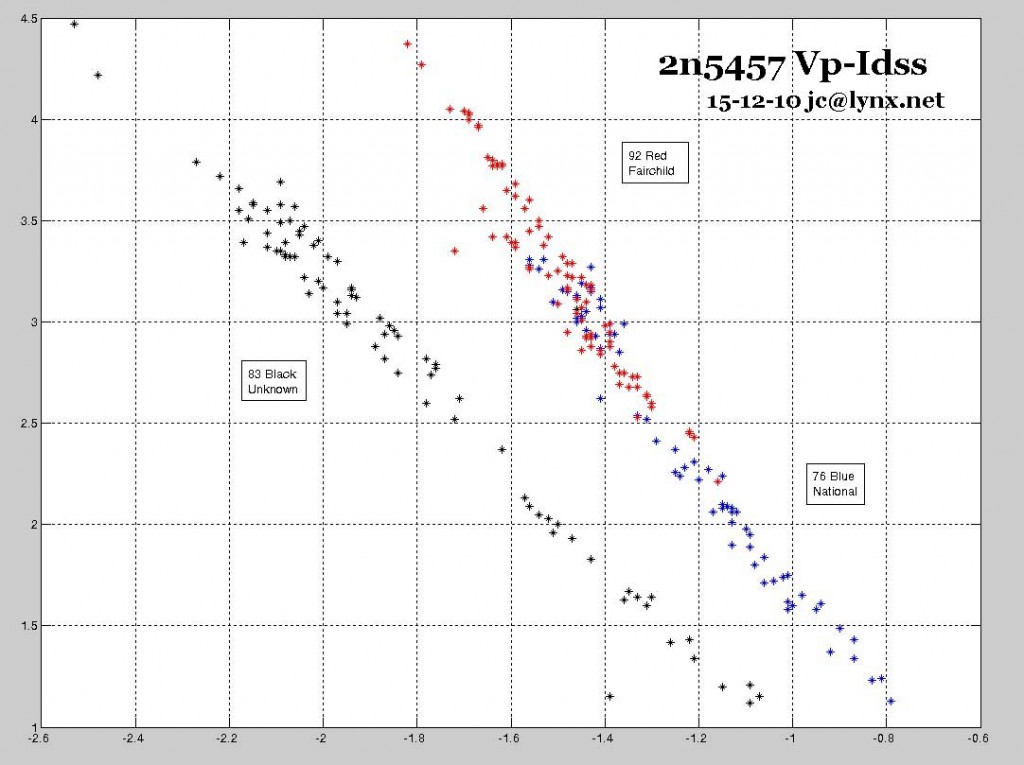 The following two pdf files demonstrates the methodology and provides tabulated results. In a total of 250 or so devices, we find very few “perfect” matches if we use +/- 5mV as a benchmark … at +/-10mV (using adjacent Vp values) the choice gets a little better, but still this study shows that even with so many devices the likely-hood of good matching is actually quite poor considering the spread of potential values / not a surprise, and something that “adds” to the jFET’s ill reputation

if researchers were to characterize their 2n5457 devices, say, using the same technique and parameters then the possibility of trading devices for obtaining matched sets becomes a reality